After I finished reading Michael Wallner’s debut novel, April in Paris, I kept thinking ‘Wow, this would make a great movie’. German soldier meets young French cutie amidst the backdrop of WWII in occupied France. They fall in love with bombs dropping in the background. War-ravaged sets and spot-on period wardrobe will guarantee at least a few awards. I am about to Netflix this as I know this movie probably already in the works. As it turns out, the reason it reads like a novel plug-in for screen adaptation is because Michael Wallner is a screenwriter. A German screenwriter who divides his time between Berlin and…Paris? No. And…London? No. And…New York? Heck no. You guessed it, the Black Forest. Or shall I indicate The Black Forest. How cool is that? If I had nickel…

But, please, don’t think this novel is light, or voyage through the sweet, innocuous waters of romanticism. This novel is complex, historically precise, tense and well-paced. With the set-up of a love affair between Roth, interpreter use by the Gestapo for his flawless French, and Chantal, young and beautiful bookshop girl who fights for the Resistance, it could veer towards the cliché. But Wallner avoids this and gives us developed and intricate characters who we immediately understand are victims of the circumstances but not unwilling to try to change them. Roth is your typical back room officer for the Wehrmacht. He gets transferred to Paris to assist in the Gestapo interrogations of Resistance fighters. He does not question, but struggles with this as he becomes more enamoured with the French language, culture and the city of Paris itself. So much so, that he dresses up every night as a Frenchman who calls himself “Antoine” and wanders the streets of Paris:

The first thing I wanted was a new name, and before I could figure why and wherefore, I opted for Antoine. Monsieur Antoine, assistant bookseller. I took the small volume out of my pocket:
La Fontaine’s Fables. The book gave me security; it reinforced my biography. Monsieur Antoine, out for a stroll. Only a low-profile promenader, a young man in a check-patterned suit. His footfall sounded the same as that of the people around him. No heavy stepping, no reason for anyone to clear out of his way. I gradually returned to normal breathing and loosened my fearful grip on La Fontaine. I pushed y hat up, high on my forehead. For no good reason, I smiled late into the afternoon.
Monsieur Antoine crossed the Pont Royal and turned into the commercial streets near the quays. Fruit and vegetable stands appeared. Beside them, people were drinking red wine from little glasses. I turned the corner ans was immediately surrounded by a babble of voices. Everyone spoke! I heard old men laughing after a girl with a flowered hat passed them. A fat women shouted across the street, and three other women answered. An abbé, his shoulders gleaming in the bronzed-colored light, blinked at a matron and made arcane predictions about the weather. The noisy, chattering world seized me and carried me away, into the sounds and the voices. I stopped in front of an old woman with an accordion and tossed a coin into her dish.

Yes, this is a man who is falling in love with Paris, with the French.

Roth’s alter-ego, Monsieur Antoine, ups the stakes exponentially and delivers an unexpected twist early in the novel. One night when Roth is traversing Chantal’s neighborhood and hanging around her father’s bookshop, he follows her but ends up being interrogated by the Resistance in the cellar of a barbershop:

The barber felt my pockets. His nose cast a heavy shadow over his mouth. Finding nothing, he drew his hand back.
“Where are your papers?”
In that moment, I saw myself the way I had seen others. Tied to a chair under a blinding light, and asked questions to which there were no answers.
“They got lost.”
“Who are you?”
“A Frenchman like yourself.”
“A French man and a collaborator,” the barber replied.
“Who says so?” Angrily, I shifted myself forward.
“Who are the people you are in contact with? Vichy? Gestapo?”
I considered my answer. The truth was worse than either of them guessed. I wasn’t collaborating, I was the real thing. I was the most complete and immediate witness to the interrogations, the first to learn everything the SS wanted to know. I stopped and thought about it, I realized that at that moment I was face-to-face with the enemy.

Roth is imprisoned by his own participation in the Gestapo as well as his burgeoning allegiance to France and Chantal. Page be page, we discover the tension of of his day job as an officer of the Gestapo and their interrogations, and the tension of his nighttime outings as a faux Frenchman constantly on the verge of betraying or being betrayed. 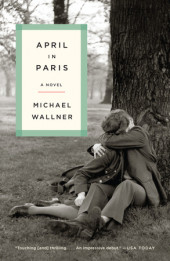 I became fascinated by the story as well as the glimpse into occupied Paris. Everyone was imprisoned in one form or another which seems could only lead to fear, paranoia and war.

If Wallner is to write the screenplay, I am betting the movie will be as good as the book, a rare feat in these times.